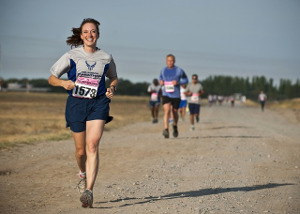 What does the pelvis do? It supports the weight of the entire upper body, as well as contribute to locomotion and posture. It would make sense then, that if one’s pelvis is out of alignment, this would cause a whole host of problems, right? People who do not run love to talk about how running can be dangerous and that running is bad for the body. Yet, there are people in their 70s completing the Boston Marathon on the regular. Running is like a magnifying glass for the body; if your posture or movement patterns are already compensating for imbalances that one is unaware of, running can augment those imbalances pretty quickly! Running is also high impact, which means that these imbalances are harder to ignore than say, dancing out of step or poor technique when lifting a weight. However, because running is an endurance sport commonly done as a repetitive motion, it can also take a very long time for these imbalances to become obvious and challenging to determine the source of the malaise. What prevents the pelvis from moving properly? If we imagine our pelvis like a bucket of water, to hold the water in, our pelvis must remain neutral. If we are sitting down, our pelvis tips forward and dumps the water out of the front of the bucket, this is referred to as an anterior tilt of the pelvis. Other factors that can cause an anterior tilt to the pelvis are if one hyperextends their knees while standing or if one wears high heeled shoes, as one’s balance is maintained by the anterior pelvic tilt, as well as sticking one’s butt out. Conversely, we could also tip of pelvis backward and dump the water out of the back of the bucket; this is referred to as a posterior tilt of the pelvis. Factors which can lead to a posterior tilt include, thoracic kyphosis (hunching at the upper-mid back from prolonged sitting/slouching), as well as bending over at the waist and rounding the low back (like when one lifts something off the floor without squatting). Both pelvic tilt abnormalities can also be caused/exacerbated by carrying excess abdominal weight.

If either of these pelvic tilt positions are maintained for a prolonged period of time, the muscles which should fire normally, cannot. This is because they are either being shortened or elongated, which causes some muscles to “overwork” and some muscles to “underwork”, and not fire at all. Just like learning any new skill, our bodies form a neural pathway between the brain and the muscle belly (otherwise known as a neuromuscular junction) to adapt to the new stress of poor posture. Then, we spring forth into running, not bothering to re-align our posture or correct the poor movement patterns. Ouch!

Some of us have great body awareness, and some of us don’t. I learned a lot of mine from yoga but also, from staring in a mirror and trying to move or isolate certain movements, for example: tilting my pelvis! Here is a nifty test to determine if you can tilt your pelvis. We need to train our posture and movement before taking on something as intense as running AND it is something that needs to be maintained throughout training. As our bodies deal with the increased mechanical load and repetitive movement, we need to constantly hone the movement we want to adapt and break down the movement we want to un-learn. Our brains and nervous system will be doin g a lot all at once!

Once you have identified whether you have a neutral pelvis, or an anterior/posterior pelvic tilt, then you can better design a resistance training program to suit running and staying injury free!

If you have an anterior pelvic tilt: hip flexors (iliopsoas and rectus femoris) are tight, lower back (erector spinae) is tight, abdominal group (rectus abdominis and potentially also transverse abdominis) is weak, and the gluteus maximus is weak. The hamstrings (rectus femoris) are usually also elongated AND tight – meaning that the first priority must be to loosen them before strengthening them. The other muscles listed which are tight should be lengthened, and the muscles listed which are weak should be strengthened. Especially the glutes. If they do not fire or are weak, then the running gait is going to originate more from the quadriceps (rectus femoris) pulling the leg forward during the swing phase, rather than the gluteus maximus engaging the leg backward during toe off.

If you have a posterior pelvic tilt: all of the above is reversed! The hip flexors are weak, the lower back is weak, the abdominal group is tight, and the gluteus maximus and hamstrings are strong. Strengthen the hip flexors, quadriceps, and lower back to help pull the pelvis back into a neutral position, to allow for better leg muscle recruitment.

If you have a neutral pelvis: lucky you! You can stay balanced by lengthening and strengthening all of the muscle groups listed above. The biggest challenge is going to be to maintain that neutrality, since running is a forward movement, gravity will also pull us forward and can pull us into an anterior tilt if our abdominals are weak.

What does all of this mean?? If something is tight, then do not strengthen it. I cannot emphasize this enough. Not only will that make your posture and running biomechanics worse, it will increase your risk of injury. The highest chance of strengthening the wrong muscles is during core strengthening work. However, when people think of “the core”, they seldom think or consider the muscles which act on the pelvis itself. Don’t ignore those hip flexors and glutes!

When comparing sit-ups to crunches, think about where the fulcrum is (what part of you is bending). If the fulcrum is over your hips, such as in during the sit-up, then your hip flexors are doing the work, NOT the abdominals. If the fulcrum is over your abdomen, such as in during the crunch, then your rectus abdominis is doing the work. Therefore, if you have an anterior tilt, strengthen the rectus abdominis; if you have a posterior tilt, strengthen the hip flexors and erector spinae. Choose the appropriate exercises for your body, NOT what everyone else is doing. The best exercise for most people with any type of pelvic tilt, is the front plank. The reason for this is that a plank strengthens your transverse abdominis (TA). This muscle is involved in core stabilization, rather than core mobility (e.g. rectus abdo minis allows for trunk flexion, obliques allow for trunk rotation), meaning that it stabilizes the spine against gravity and is a deep muscle that when strong, will help to prevent abdominal distention. The stronger your TA, the less work the core mover muscles need to work to compensate (sounding familiar?).