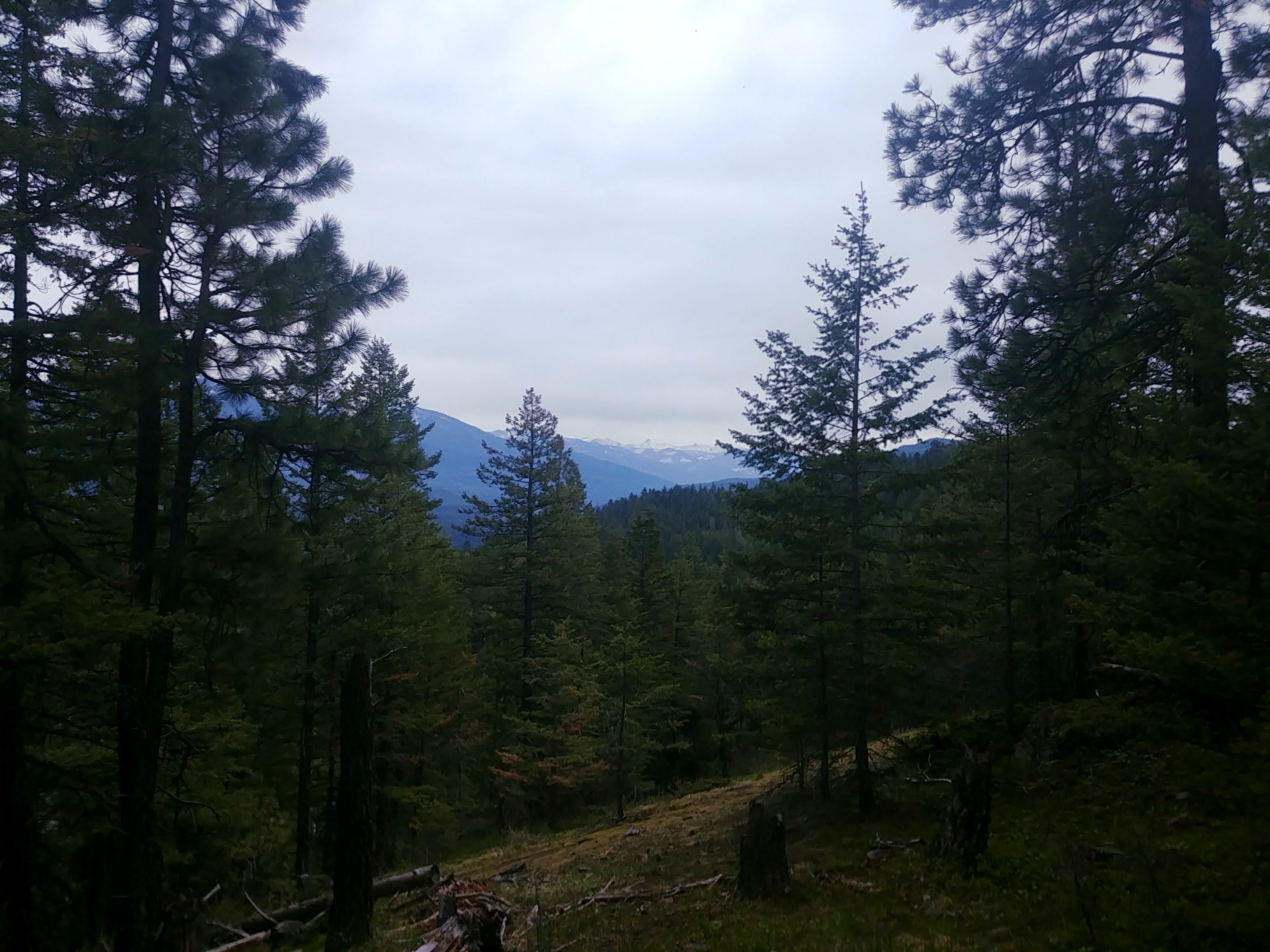 We left Vancouver around 3:30pm Thursday to make our way to Montana. We drove to Spokane and slept in a cheap hotel, then left Friday morning for Kalispell, Montana.

The drive from Spokane to Kalispell was gorgeous! We went through Lolo National Forest between Idaho and Montana to get there. The event itself was in Bigfork, Montana, inside of Glacier National Park. All the businesses in Kalispell had “Welcome Spartans” signs in their windows, which were awesome. I haven’t been welcomed by a whole town like that in a long time! Anytime I ran into someone wearing any Spartan swag, I would ask them where they were from. A lot of people were from Washington state, and we would share in our griping over the mud during the Seattle races from 3 weeks ago. I love bonding with strangers like that; it feels as if they are like friends I haven’t met yet. Weather was looking to be warm and dry, and that alone was making me excited.

We arrived at the house we were staying at. Some friends of mine from another training club, Beasts OCR, invited me to stay with them. Sweet! Nice house, great people, and a hot tub. Once we dropped off our things, my boyfriend and I headed back into Kalispell to get some steak, because when in Rome, eat a Montana steak! The place we chose based off online reviews worked out quite well; a little place called the Winchester Steakhouse.

Saturday morning comes around. Weather still looks good, but a little cold in the morning. I’ve never worn layers before, but that day was the day I would try it. I was really happy that I did because long sleeves were great for the first 3 hours but my racerback tank from mid-afternoon onward was lovely. I was wearing pants that I had only worn a few times before; much to my surprise, one side was split along the inner thigh seam. This got much worse during the race, and split on the other side, too. I really hope to never have to deal with that, again!

The course was nice and dry. It felt like the mud had to be created. Almost as if someone took a hose out to water the land and made some muddy sections. The only time the mud seemed like it was there “naturally”, was when we came out of the water trenches, one of which looked manufactured, and the other appeared to be a pond. Perhaps that was filled with glacier runoff? It wasn’t a river, because the water wasn’t moving, but it was up to my chest! Anyway, it was nice that most of the course was dry, since Seattle was so exhausting on account of the mud and cold. Did I mention the terrain was varied and stunning? It was great to experience all manner of surfaces! Dirt, rocks, sand, mud, up, down, and you know the dunk wall was placed well when everyone is looking forward to it!!

Oh yeah, that up and down I mentioned? The worst of the biggest up came after mile 9. It was multiple stages. As in, you see it flattening out and then you arrive there and you find out that you were wrong. More up to go! I only cramped up once during this race, and it was my left inner thigh on this crazy uphill. It didn’t just cramp, it seized! I stopped moving, started slowing down my breath and massaged my leg. Once it felt like I could move it, I started going up the hill backwards, just to change which muscles were being used. This strategy seemed to work, because I didn’t experience that cramp the rest of the race. My hydration and electrolytes were on point, too. Pretty sure that muscle was just protesting the Beast-like torture I was putting it through. The uphill wasn’t even the worst part. The downhill descend was equally as steep but the terrain was sand and it was very easy to lose one’s footing. I couldn’t run down it because I would skid on my face. I had to walk down it. This resulted in hurting my left knee big time, because walking meant I couldn’t use my downward momentum to move forward, I was breaking with every step I took. I would have loved to have just slid on my butt, but seeing as I had already split my pants, I wasn’t willing to risk my pants falling apart completely. I saw one girl doing a crab walk on the side, but she could only manage that for about 30 seconds.

We didn’t even see the mile 10 marker but when we saw the mile 11 marker, there was so much joy! By the time I got to the last few obstacles, I could barely even attempt them. I couldn’t even do burpees; I would stop in a high plank position and then walk my feet to my hands. I started doing 10 bodyweight squats anytime that I needed to do burpees. I had never been so relieved to see the second barbed wire crawl in my life! I barrel rolled the whole thing and that allowed my knees a break.

Fun thing that happened, I ran into someone else from the Beasts OCR team on course, who has been in my club’s Facebook group for some time, so I was happy to finally meet him! Thankfully, he was a ball of enthusiasm and encouragement and ran the rest of the race with me and my mate whom I began the race with. This is one of the things I love the best about obstacle course racing and why I keep coming back for the punishment, meeting awesome people on course and forming new bonds in sharing an experience.

My new race mate and friends back at our cabin said that this year’s course was harder than last year’s. Apparently, the course setter was a bloke named Steve Hammond who LOVES hills. So every time we came up a hill, my friend would exclaim “fuck you, Steve!” and shake their fist at the air. Pretty hilarious! Despite all my pain and suffering, I would still come back to this venue again next year, and I still enjoyed it more than the Seattle Super. I have to stop choosing those Seattle April races to start my season with. Just too wet and cold. Even though I have already completed my first trifecta of the year, I am feeling more deflated than last year. Last year, my expectation was to do a bunch of Spartan Sprints, just to get used to the sport. I exceeded my expectations, as I ended up signing up for 2 Supers, and 1 Beast, without much consideration. I felt I could do them, so I did them. This year has been different. I set the goal of completing 3 trifectas, and I wanted to do better and feel better than I did last year. I am starting to realize that I’m not any stronger, faster, or fitter than I was last year, and that’s a hard pill to swallow. I spent all of the Sunday drive back to Vancouver, ruminating on the race the same way I did following the Seattle races. How can I train differently to make progress and perform at the level that I want to?

I also felt like this Montana race was the right sized challenge, for me. I am feeling way more nervous about the Tahoe Beast and am strongly considering deferring that entry for another Beast later this year (looks like the one closest to me and fits into my calendar is in Southern California Oct 20th). If I did this, I would still complete 3 trifectas, but so that my last Beast is on a course that will be a similar difficulty to the one I just completed. Tahoe would be the hardest race of my life because it’s the Spartan World Championships. I knew this when I registered, but the magnitude of what that really meant only became apparent after this Montana race. The elevation and incline aside, there was a swimming obstacle last year, and you have to bring all your gear with you. I have been getting carried away with the enthusiasm of my friends. It’s why I love obstacle course racing. Everyone is on board with each other’s goals and is so encouraging. I realize that a lot of people’s barriers are mental limits which can be worked around. However, some of it is taking a humble look at one’s fitness level and ability and realizing how much farther away one is from where they want to be and I honestly no longer believe I would enjoy racing in Tahoe. Not yet. The last thing I want to do is walk off course because I overestimated my ability, or get pulled off course because I was too slow. A “DNF” would be soul crushing and not worth it for something that I feel like I have not done the work for.